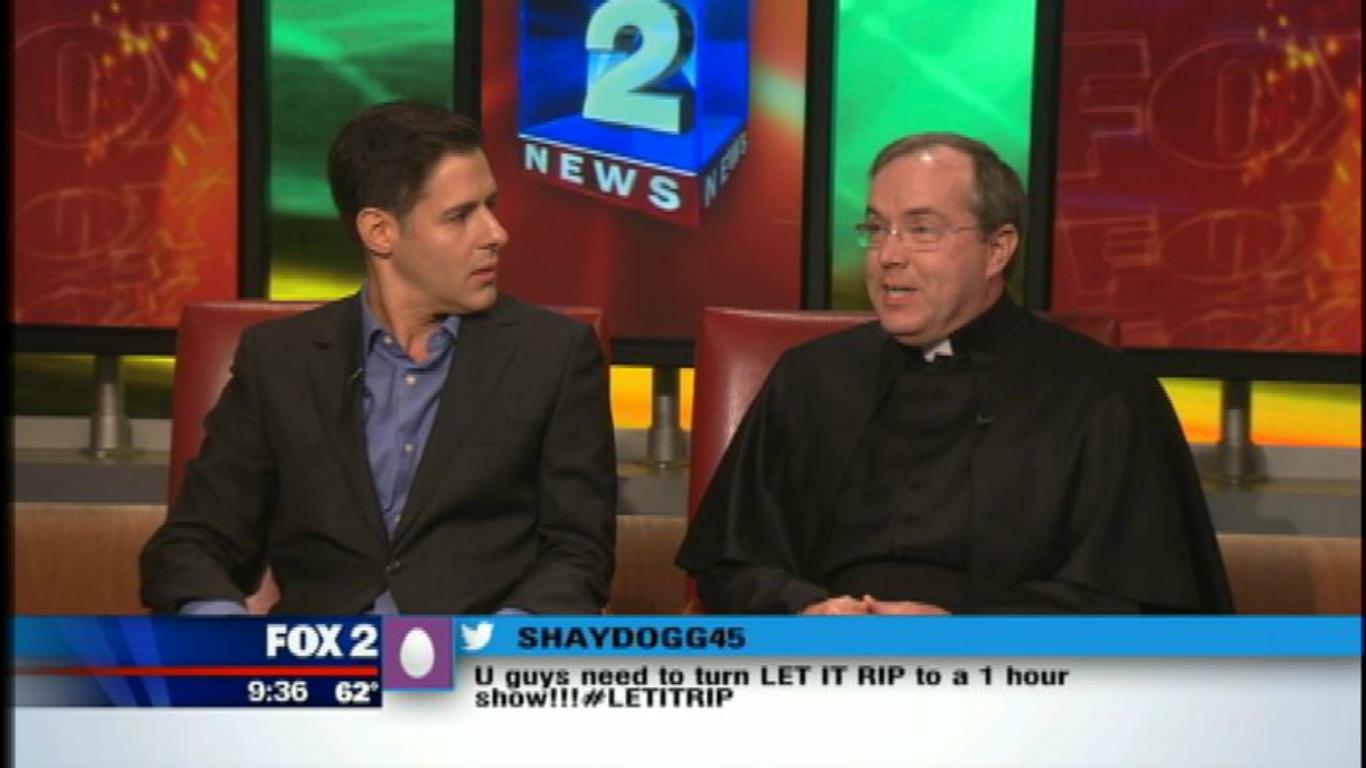 Back in February of this year I was extended an invitation to speak at Providence College, a Catholic college in Rhode Island.  We agreed on a September 26 lecture date, and in the intervening months, I have corresponded regularly with the philosophy professor who had initially contacted me. As I understood it, my invitation was approved by various department heads whose units would co-sponsor the lecture, entitled “The Meaning of (Gay) Marriage.” The sponsoring units included the Black Studies Department, the Development of Western Civilization Program, The Feinstein Institute, the Global Studies program, the Philosophy Department, the Pre-Law Program, the Public and Community Service Department, the Sociology Department, and the Women’s Studies Program.

This past Saturday September 21 I was informed that my lecture had been suddenly cancelled. In an e-mail to the faculty (reproduced below), Provost Hugh Lena claimed that the event violated college policy. He cited the U.S. Catholic Bishops’ 2004 statement Catholics in Political Life, which states that “Catholic institutions should not honor those who act in defiance of our fundamental moral principles. They should not be given awards, honors or platforms which would suggest support for their actions.”

Provost Lena’s invocation of Catholics in Political Life strikes me as misplaced. That statement arose in response to controversies surrounding the denial of Holy Communion to pro-choice Catholic politicians. The reference to “awards, honors, or platforms which would suggest support for their actions” applies, for example, to allowing such politicians to present commencement addresses or to receive honorary degrees. By contrast, I am an academic speaker. Both the person introducing me and I would state clearly that my views were not those of the Catholic Church; moreover, a respondent from the Providence College theology department, Dr. Dana Dillon, would follow immediately to explain the Church’s position on marriage. Far from suggesting “support” for my views, the College would have ample opportunity to express precisely the opposite.

Provost Lena complains that Dr. Dillon’s response was arranged only recently:  “While I applaud Dr. Dillon for her willingness to present on such a complex and controversial topic,” he writes, “it is simply not fair to her to give her less than one week of preparation opposite someone who has been lecturing on this issue across the United States for years.”

It is true that Dr. Dillon—very graciously—agreed just last week to participate. Apparently some members of the Providence College community raised concerns that “all sides of the issue” be represented; in response, I told my host that I would welcome having a respondent. Indeed, during our earlier correspondence I had suggested that, instead of a solo program, I do a debate; I even recommended some prominent opponents. That suggestion was ultimately declined for what appeared to be reasons of expense.

As a fellow scholar I am offended on Dr. Dillon’s behalf. If she felt unprepared to respond, she could easily have declined. For her provost to declare her unprepared, however, is an affront to scholarly autonomy and academic freedom. It also does not speak well of Provost Lena’s confidence in his philosophy and theology departments that he believes that no one there can persuasively articulate the Catholic position on marriage with a week’s notice.

Provost Lena seems especially concerned that “both sides of a controversial issue . . . be presented fairly and equally,” and I applaud him for this goal. It is very much in the spirit of St. Thomas Aquinas, the most famous member of the order that founded Providence College, and the greatest philosopher of the Catholic intellectual tradition. My impression, however, is that Providence College actively avoids the airing of views that challenge the Church’s traditional teaching on marriage. The provost seems to want to have it both ways: the appearance of a commitment to vigorous academic dialogue, combined with an isolationist approach to disfavored views; in other words, a Catholic identity defined primarily by what it excludes rather than what it includes.

Pope Francis, the Catholic Church’s new leader, has been justly celebrated for his welcoming tone toward gays and lesbians. Notwithstanding my abrupt dis-invitation, I remain hopeful that Providence College may soon better reflect that tone.

A Message from the Provost

“The Meaning of (Gay) Marriage,” a lecture by Dr. John Corvino, associate professor and chair of Philosophy at Wayne State University, which was scheduled for Thursday, September 26 and announced via email yesterday afternoon, has been cancelled.

While academic freedom is at the heart of teaching in a Catholic university, the United States bishops maintain that in accord with Ex corde ecclesiae: “the Catholic community and Catholic institutions should not honor those who act in defiance of our fundamental moral principles. They should not be given awards, honors or platforms which would suggest support for their actions” (Catholics in Political Life, USCCB, 2004).   When it comes to mission-sensitive issues, Providence College has always sought to provide a context which allows for open and honest debate, a forum where both sides of an issue are presented in accord with the ideal of a disputed question. College policy therefore dictates that both sides of a controversial issue are to be presented fairly and equally when discussed in a forum such as this.  That was not the case with this proposed event.  The notice sent out yesterday mentioned that there would be a response to Dr. Corvino by Dr. Dana Dillon of the Providence College Theology Department.  However, it has come to my attention that Dr. Dillon was asked just yesterday afternoon to provide that response.  While I applaud Dr. Dillon for her willingness to present on such a complex and controversial topic, it is simply not fair to her to give her less than one week of preparation opposite someone who has been lecturing on this issue across the United States for years.

The New York Times story on the cancellation is here. 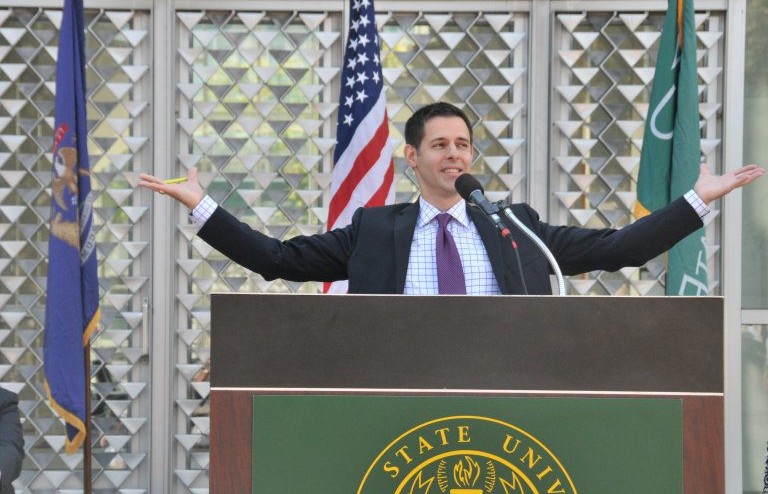 On October 25, 2012, John debated Maggie Gallagher, his co-author/opponent in Debating Same-Sex Marriage, at the University of Notre Dame. Watch the full debate here: 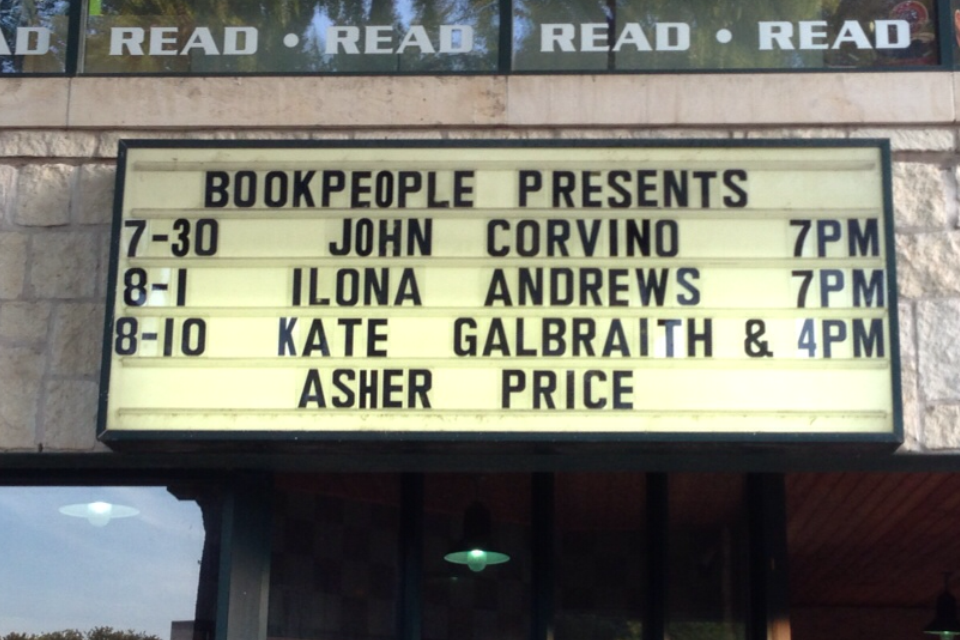 My gratitude to BookPeople in Austin, Texas for a delightful event on July 30. BookPeople has hosted a signing for each of my three books (including my 1997 anthology). Support your local bookseller!

My 2007 recording of “What’s Morally Wrong with Homosexuality?”, which has for several years been available for sale as a DVD, is now available for free on YouTube:

The hour-long lecture, which I first presented in 1992 and then honed in front of hundreds of audience members over the the years, tackles the most common arguments against same-sex relationships. It was the foundation for my recent book.

I’m excited that it is finally so widely accessible. Please share! 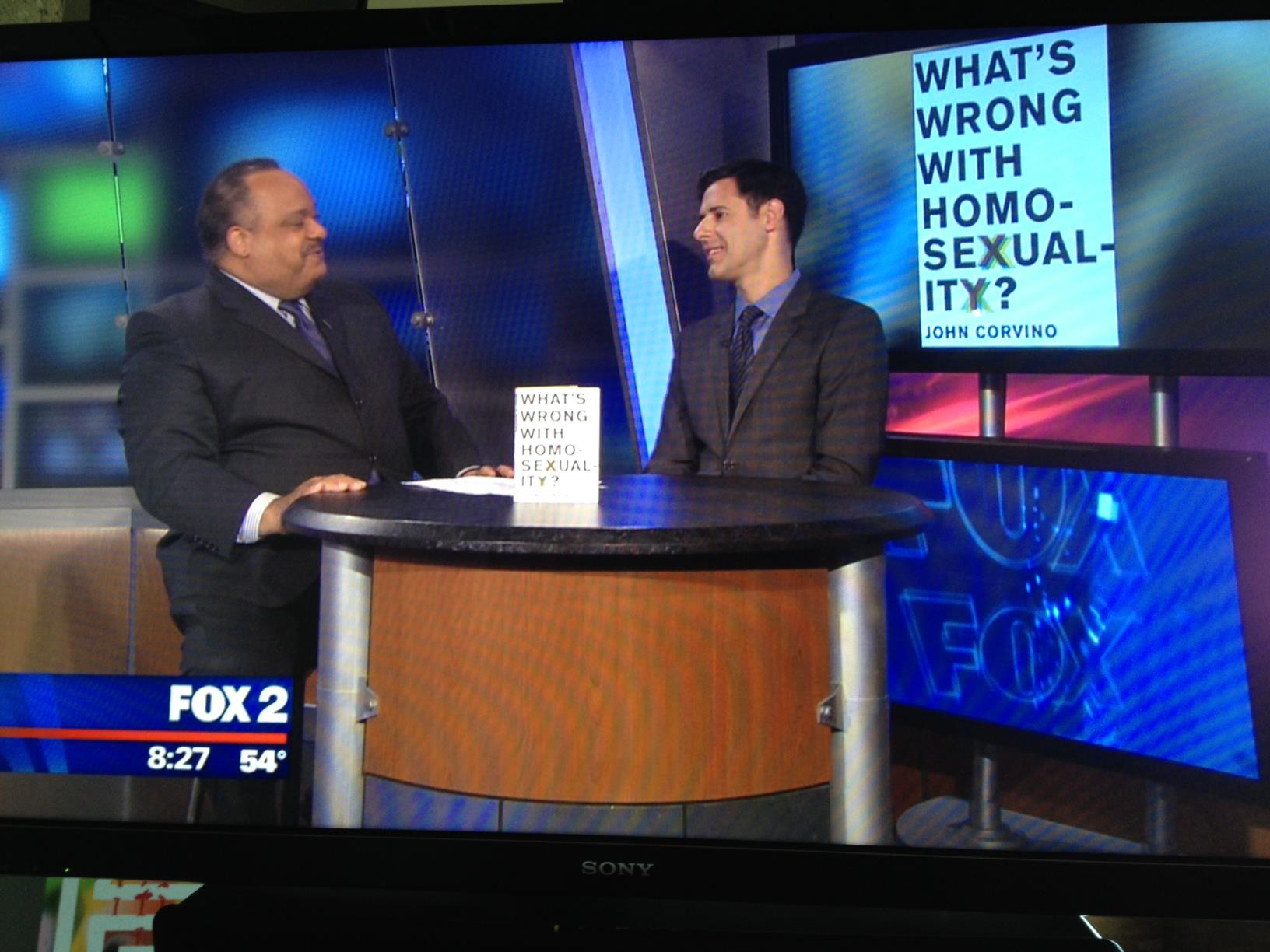 John appeared recently on the Fox2 Detroit Morning Show with Alan Lee to talk about his upcoming booksigning, Roy Hibbert’s use of “No homo,” and other matters. Watch the full interview here. 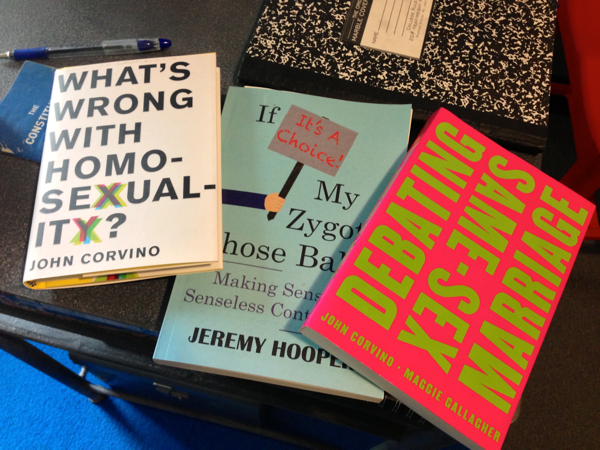 Jeremy Hooper at GoodAsYou.org interviews me about my collaboration with evil supervillain Maggie Gallagher. (At least, that’s how some of his readers see her.) It was a nice opportunity to respond to some criticisms I receive frequently. Check out the full interview here. 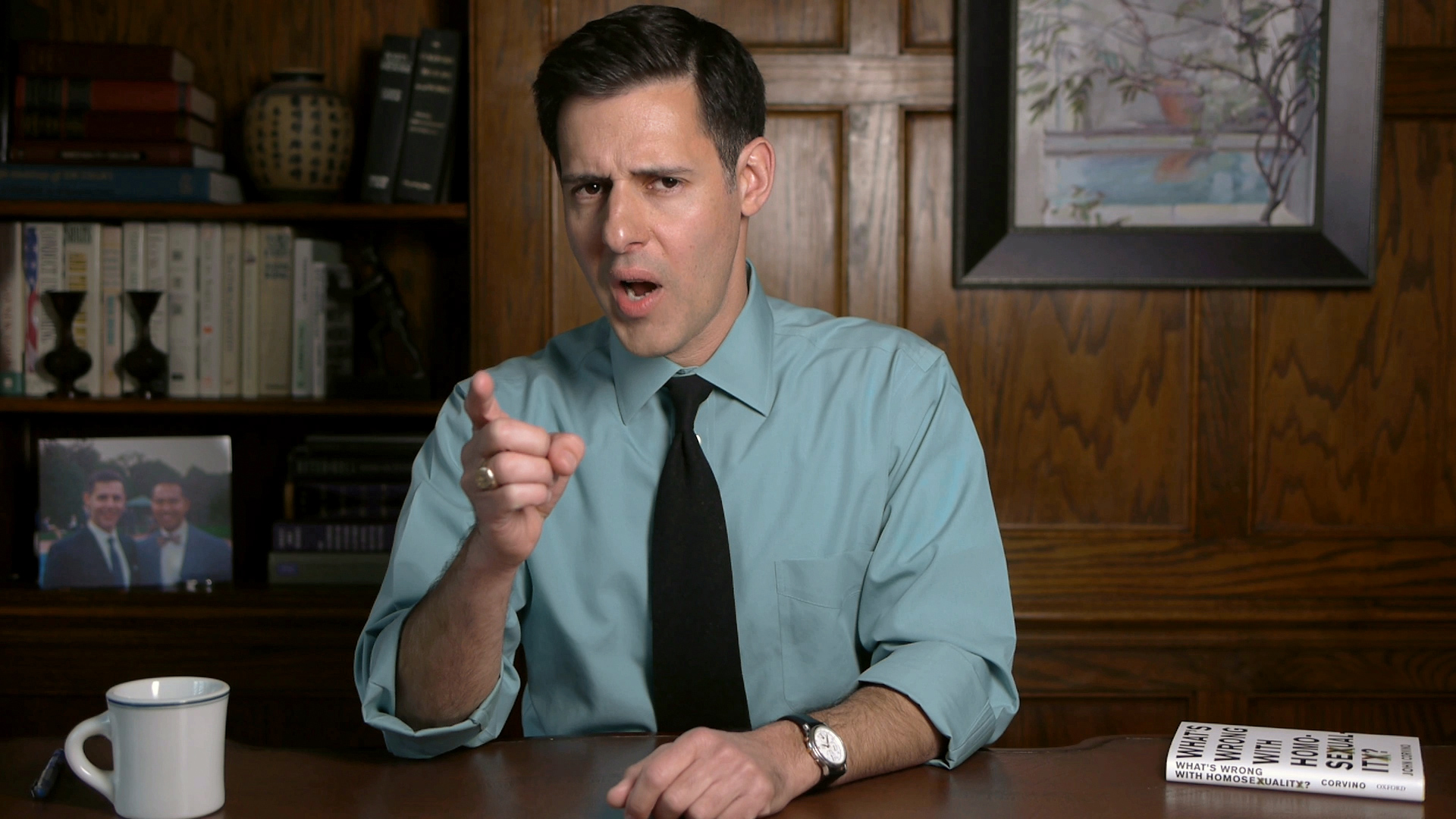 The current debate over same-sex marriage, at the U.S. Supreme Court and elsewhere, has revived the moral debate over same-sex relationships. Despite tremendous social and political progress, LGBT people—and especially, vulnerable LGBT youth—continue to face objections to the way they experience love and affection.

In this new video series John Corvino addresses these objections with his trademark combination of logical precision, sensitivity and humor. Is homosexuality unnatural? Does the Bible condemn it? Are gay people born that way, and does it matter? For the past 20 years, John Corvino has traveled the country to address such questions. In his new book What’s Wrong with Homosexuality? (Oxford University Press, 2013) he presents his insights, and in this new video series he shares some of the book’s content in an accessible and occasionally hilarious way. 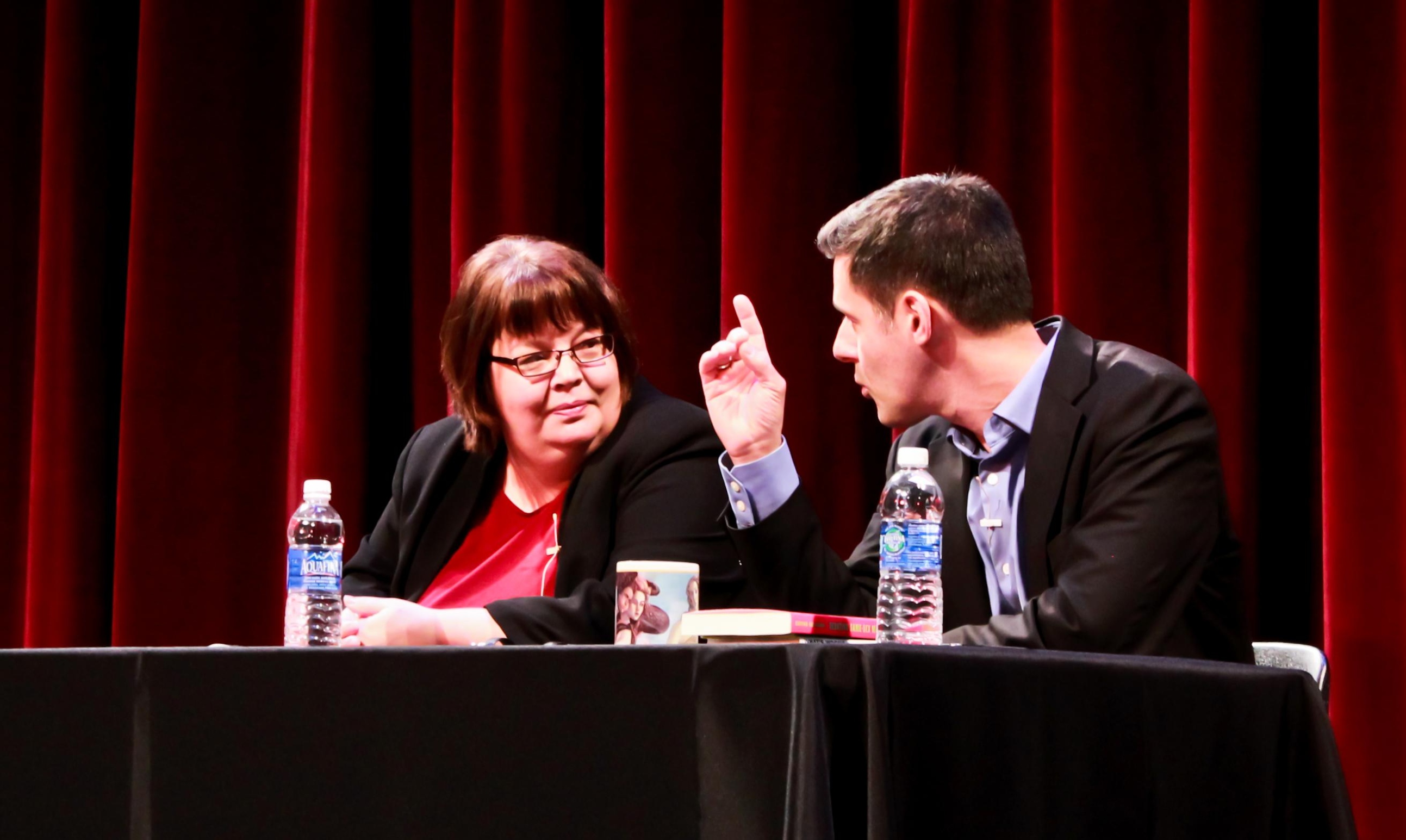