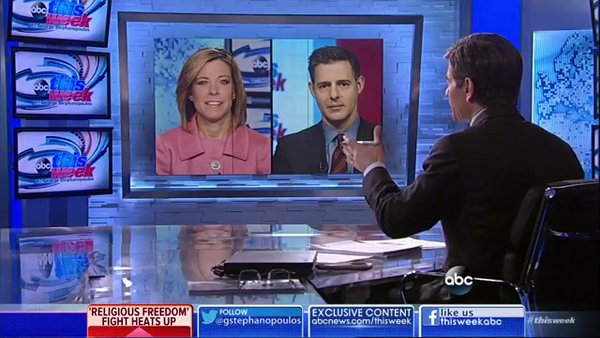 On ABC’s This Week with George Stephanopoulos, I discuss the recent “bathroom bill” in North Carolina. From the interview:

The idea that this is about safety and security, it’s kind of like when somebody says that they ate all the ice cream in order to make room in the freezer. I mean it’s just obvious that that’s not the real reason. This is about discrimination, particularly against transgender people.

It’s a quick interview, and by the time I start getting warmed up, it’s over. But you can watch the full segment here.

Yesterday at the Detroit Free Press I argued that supporting Kim Davis’s religious liberty doesn’t mean tolerating her refusal to do her job as county clerk. “Religious liberty does not entitle the bearer to line-item vetoes for essential job functions,” I wrote.

In passing I mentioned that she has been divorced multiple times, which shows how inconsistent she is in enforcing Biblical law. Others have made the point more sharply, noting that she became pregnant with twins from husband number three while married to husband number one, in Maury-Povich-worthy twists. Husband number two, who adopted the twins, is also her current, fourth husband.

In response to revelations about her marital history, her Liberty Counsel attorneys have rushed to her defense. According to U.S. News and World Report:

[Attorney Mat] Staver says “it’s not really relevant, it’s something that happened in her past” and that her conversion to Christianity about four years ago wiped her slate clean. “It’s something that’s not relevant to the issue at hand,” he says. “She was 180 degrees changed.”

Casey County Clerk Casey Davis, who is not related to Kim Davis, tells U.S. News he believes there’s a difference between getting a divorce and then repenting and living in a same-sex relationship.

“I don’t have any problem with that whatever, how she was before. If the Lord can forgive her, surely I can,” he says. “That’s something that’s forgivable just like any other sin, but if you continue in it and live in it, there’s a grave danger in that.”

Notice that, in Jesus’ words, divorced and remarried people are not people who did sin (past tense) and then had their slate wiped clean. They are people who are sinning, as persistent and unrepentant adulterers. Why isn’t there “grave danger in that”?

I recognize of course that divorce is sometimes the best option for those in a bad marriage. On the other hand, unlike these folks, I don’t go around trying to substitute “God’s law”–or my own self-serving interpretation of it–for the laws of the state.

At the New York Times “Room for Debate,” John argues that gay rights and transgender rights are related but distinct:

Each group has distinctive needs and challenges. By jumbling them all together into one alphabet soup — L.G.B.T.Q.I.T.S.L.F.A.A., anyone? — we run the risk of covering or erasing people’s experiences, especially those who are already most marginalized.

Read the full article here. And check out this video, which explains some of the distinctions:

My first full-length op-ed at the New York Times. Here’s an excerpt:

[When he says] “who am I to judge,” surely the pope is not relinquishing the church’s assertion of authority in matters of faith and morals. But he was adopting a tone of humility. And tone matters.

But let’s not miss the grain of truth in both Agema’s and Daniels’ position: Gay life is indeed risky. The main source of that risk? People like Agema and Daniels. 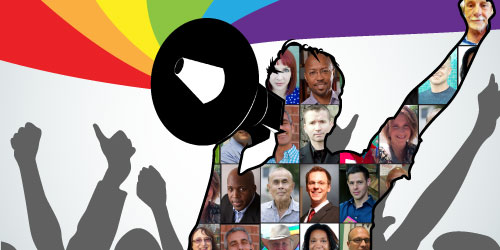 From my New Year’s column:

2013 should also be a time to explore more deeply the significance of marriage: Now that we have it (in 9 states and counting), what should we do with it? What does it mean to aspire to it? What does a healthy marriage culture look like, and how can LGBT people make a distinctive and valuable contribution to that culture?

Read the full column at PrideSource.com.

Just posted a piece at The New Republic in response to our game-changing victories in the four states with marriage votes:

It is one thing for the state to allow you to marry, and quite another for your parents to show up at your wedding and be happy for you. Both are significant….

The election is over. The pro-equality forces won, and won big. But the fight for marriage is a long game.

Read the full piece at TNR.

Evangelical blogger Matthew Lee Anderson and I weigh in at TNR on the Chick-Fil-A wars. 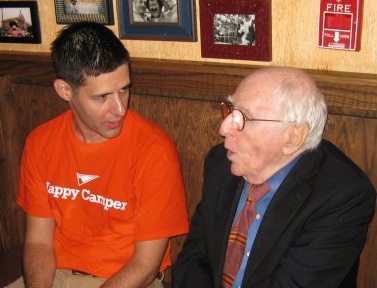 First published at Between the Lines News on October 20, 2011

I was in San Francisco when I received the news, about to go on stage to deliver a National Coming Out Day lecture. A friend texted me: “Frank Kameny passed away today.” The godfather of the gay rights movement was felled by a heart attack at the age of 86.

Like others, I saw Frank as a movement giant. But I also had the great privilege of knowing him personally, having participated on a listserv and exchanged many e-mails with him over the years. Mostly I saw him as a moral force, an elder from whom to draw both wisdom and fortitude.

I last saw Frank two years ago, when I was a volunteer faculty member for Campus Pride’s Leadership Camp. Camp was in D.C. that summer, and when I told everyone that I knew Frank and that I could arrange for him to visit, I drew the expected reaction: the faculty were in awe, and the campers (all of whom were college students) were quizzical: “Who’s Frank Kameny?”

The easiest way for me to answer that question succinctly was to say, “Frank Kameny is like the Rosa Parks of the gay rights movement.” But the analogy is imperfect in many ways. Parks’ civil disobedience was backed by an organized movement; Kameny had to forge a movement. Parks is in the history books; Kameny—like LGBT history more generally—has been largely overlooked, despite his half-century of leadership.

It is no exaggeration to say that every living LGBT person has benefited from that leadership. Frank was out and fighting at a time when being openly homosexual was not only professional suicide—Frank lost his job as a government astronomer in 1957, and never again worked in the field—it also put one in physical danger. But Frank never shrank from the fight for justice.

Elsewhere in this issue is a full obituary, detailing Frank’s many accomplishments. Here I want to highlight three lessons which I personally carry with me thanks to Frank. They were the sort of things of which he would often remind me and others in the vigorous e-mail correspondence he kept up; things that, even now, I can hear his distinctive voice saying.

Jonathan Rauch once wrote aptly that Frank’s voice “has been compared, unfairly, to a foghorn (unfairly, that is, for the foghorn).” But foghorns do get your attention.

The first lesson is parity. Whenever someone asked “What makes people gay?”, Frank insisted that the question could not be separated from the question “What makes people straight?” Because of his unrelenting belief in equality, he challenged any approach that treated homosexuality as “abnormal” or in need of some special explanation.

The second is engagement. Whenever Frank would hear me or other “young” activists griping about some stupid anti-gay argument, policy, or legislation, he would growl “Don’t tell me, tell them! Contact the people who can do something about it.”

Frank himself was constantly writing letters to anti-gay legislators, public figures, and bloggers. Here’s an excerpt from one, written in Frank’s distinctive style:

“Our true God gave us our homosexuality as a divinely-inspired gift and blessing, to be enjoyed to its fullest, exultantly, exuberantly, and joyously.

‘Gay is good, Godly, moral and virtuous, and American. You homophobes are evil, ungodly, immoral and sinful, irrational to the point of utter lunacy and beyond, and un-American and anti-American. You don’t have a clue to what America and true Americanism are all about.”

The reference to “God” is amusing: Frank was an outspoken atheist. But he didn’t mind helping himself to religious rhetorical flourish when the moment called for it.

The third lesson was about seizing the moral high ground. Frank understood that the fight for equality was a MORAL fight if anything is. He once told me that his own proudest accomplishment was coining the slogan “Gay is Good” in 1968; it captured his vision succinctly.

My own work as “The Gay Moralist” has been powerfully influenced by Frank’s example of never conceding “moral values” to the other side.

Let me close with a favorite personal anecdote.

In 2004 Frank came to Detroit to speak at a screening of the documentary “Gay Pioneers,” in which he is prominently featured. Before the film Frank visited my house for dinner. When I offered drinks in my living room, he asked if I had any peach schnapps. To my surprise, I found some in the cabinet, so I poured him some. Then some more, and more again, not really keeping track. Finally, when it was time to leave for the film, we all stood up…

…and Frank proceeded to trip over my coffee table and fall flat on the floor.

Everyone gasped. A news headline flashed before my mind: “Young gay writer kills veteran gay activist with cordial.” But then Frank spryly jumped up, laughed, and boomed in that unforgettable voice, “Too much peach schnapps!!!”

I’m raising a glass of schnapps to you, Frank. We will always remember: Gay is Good.